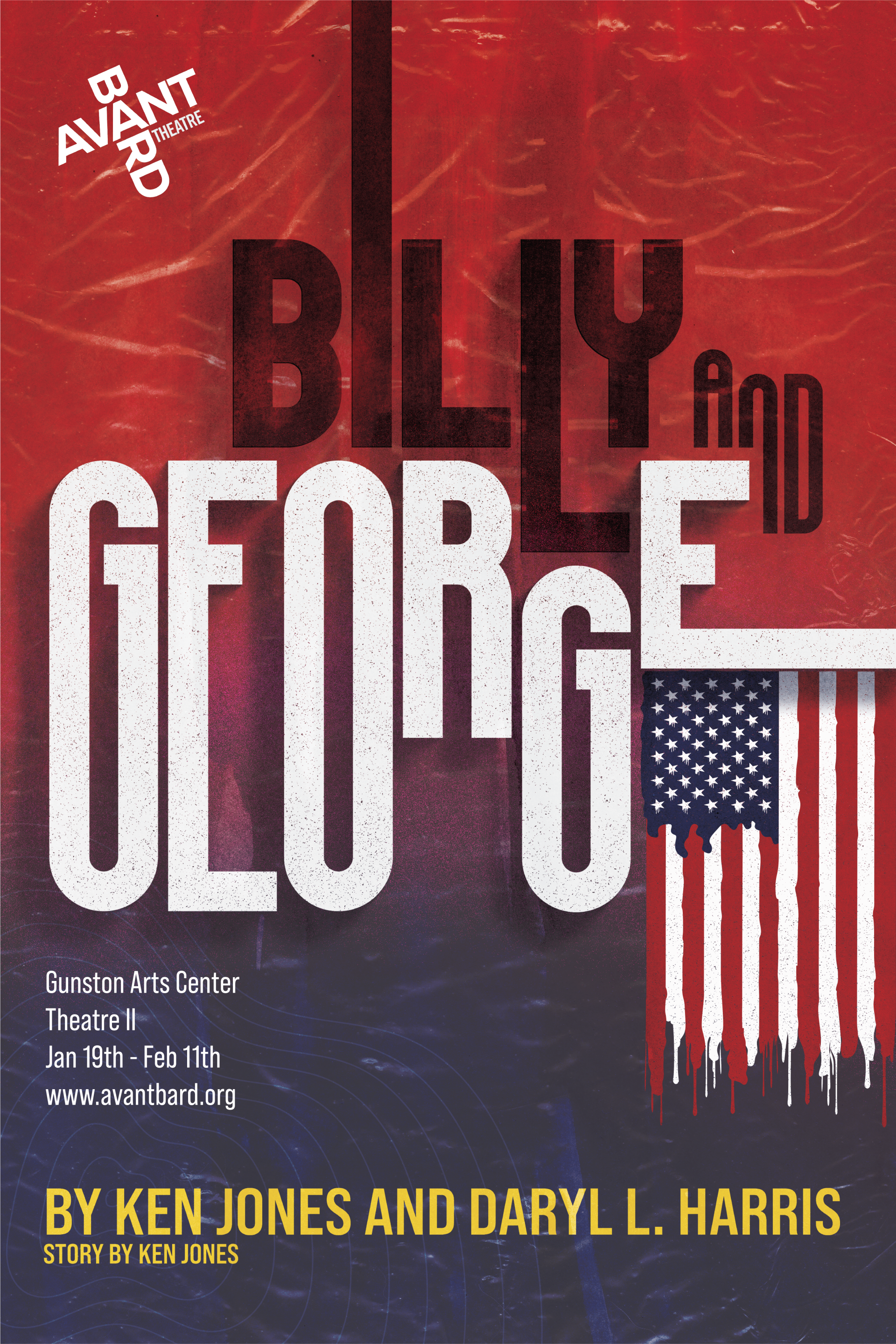 Welcome to the world premiere of Billy and George, written by Ken Jones and Daryl L. Harris. It’s December 25, 1776, just hours before General George Washington and the Continental Army cross the Delaware River to defeat the Hessian soldiers at Trenton, New Jersey. Washington and his closest companion, the enslaved person William “Billy” Lee, prepare for the crossing while discussing, arguing, and challenging the concepts of freedom, war, and love. Come for a nuanced portrait of the nation’s first president and meet the unexpected confidante who influenced Washington’s perspective on peace, freedom, and independence.

1 hour and 25 minutes (no intermission)

Ken Jones (Playwright) has had original plays and musicals produced throughout the US, Canada, Europe, Australia, and New Zealand. His play, Darkside, was chosen as TIME Magazine’s Critic Choice and was also recognized as one of the best plays of the 1980s. Other works include A Red Eagle Falling, The Middle Of Yesterday, Lincoln: A Pioneer Tale, Burgertown, the musical, Church Girls the musical, Victims of the Ice Age and Sleeping Beauty: Rise and Shine.

In addition to his career of writing for the stage, Jones has also created content for film and television.  He was a member of the prestigious Warner Bros. Television Writer’s Workshop and went on to serve as the Head of Development for Light Point Entertainment at Disney/MGM Studios for the development and creation of content for television and film.

Ken Jones is an active member of the Dramatist Guild of America, the National Academy of Television Arts and Sciences, and the Stage Directors and Choreographers Society. This is Ken’s third collaborative project with Daryl Harris.

Daryl Harris earned BA and MFA. degrees from the University of Southern Mississippi and a PhD from the University of Alabama. Harris is an actor, director and costume-designer for film and theatrical productions both nationally and internationally. He has worked throughout North America, Europe, West Africa, Asia, and Australia.

Daryl is a 2010 recipient of President Obama’s President’s Call to Service Award—the highest level of awards recognizing and honoring volunteerism. He is a Fulbright Scholar, where he wrote, costumed, and directed the Sri Lanka International Buddhist Academy’s world premiere production of Sanda Kiduru.

DeMone Seraphin (Director), he/him, last directed August Wilson’s How I Learned What I Learned for Avant Bard where he serves as an Avant Bard Producing Partner. DeMone also directed Topdog/Underdog (Helen Hayes nomination for Outstanding Direction of a Play) and The Gospel at Colonus for Avant Bard. Other recent directing credits include Five Guys Named Moe (The Fulton Theatre) and the regional premiere of Chicken and Biscuits (Virginia Rep Theatre). Other directing credits include the German premiere of August Wilson’s Jitney, Once Uponzi Time: An American Scheme (Princeton’s Triangle Club at The McCarter Theatre). NYC directing credits include Dutchman, Split Second, and the world premiere of The King: The Final Hours, An Elvis Presley Musical. As an actor DeMone has appeared on Broadway, Off Broadway, regionally and internationally in Ragtime, Miss Saigon, Rent, Jesus Christ Superstar, Memphis, Sideshow (Jeff Award for Best Supporting Actor in a Musical), Ain’t Misbehavin, the Best Of Both Worlds, Uncle Vanya, Othello, Once On This Island, Big River, Crowns, and Sweet Charity. On screen DeMone has appeared in Person of Interest, Law and Order SVU, The Inevitable Defeat of Mister and Pete, Hush, The Subject, The Magic Door, and Bad Street.

Sarah McCarthy (Stage Manager) is happy to join the Avant Bard community as a Stage Manager. Her past work includes Eastward Ho! at the Maryland Renaissance Festival, There’s Always the Hudson at Woolly Mammoth Theatre Company, and Blue Door at Perisphere Theatre.

Amanda Jackson (Costume Design) is a fourth-year Virginia Commonwealth University student pursuing a BFA in Costume Design. Her past works include costume design for VCUarts Theatre’s collaboration with the Conciliation Project’s production of Whitesplaining and the east coast premier of Chicken and Biscuits at the Virginia Repertory Theatre. She has also been the Costume Designer for the New Surge Productions student films Powhatan Ratman and Busker Jones. This is her second production working with the wonderfully talented director DeMone Seraphin. She is extremely excited and blessed to be able to bring this show to life.

Hailey LaRoe (Lighting & Projections Designer) is happy to return to Avant Bard after designing lighting and projections for Suddenly Last Summer. Hailey is a lighting and projection designer, based in the DC area since 2018. Her recent lighting design credits include Clue on Stage (Anne Arundel Community College), Nat Turner in Jerusalem (Next Stop Theatre), Rhinoceros (Pointless theatre co.), and Man Covets Bird (Spooky Action Theater). Hailey’s Projection work includes a design for Christmas Eve (ExPats Theatre), assistant projections and content creation work for Show Way (Kennedy Center TYA), associate projections for The Phlebotomist (1st Stage), and assistant projections for La Casa De La Laguna (Gala Hispanic Theatre). Hailey has really enjoyed working with such a great group of people on this production and she hopes you enjoy the show! If you’re interested in more of Hailey’s work you can find it at Haileylaroedesigns.com.

Megan Holden (Set Design) she/her/hers, a local scenic designer and scenic painter, is marking her third production with Avant Bard Theatre. Megan received her BA in scenic design and film production from James Madison University. Since moving to Arlington in 2019, Megan has worked as a scenic designer and painter at companies across the DMV. Some area credits include scenic designing Major Barbara and Ben Butler (Washington Stage Guild), A Misanthrope and How I Learned What I Learned (Avant Bard Theatre), Fame, Pippin, and Chicago (The Free Theater), Rainbow Fish the Musical, The Dew Drop Inn, A Snowy Night at the Dew Drop Inn (Anacostia Playhouse), Brave Spirits Theatre’s repertory season of 8 of Shakespeare’s Histories, La Llorona (We Happy Few Productions) and 46 Plays for America’s First Ladies (Nextstop). She hopes you enjoy the show!

David Lamont Wilson (Sound Design) is thrilled to be returning to Avant Bard, and working again with DeMone Seraphin. David most recently sound designed the Virginia Repertory Theatre’s production of Chicken and Biscuits. Other recent sound designs include the 2022 Off Broadway production of Queens Girls In The World for Abingdon Theatre Company, School Girls, Or the African Mean Girls Play for Hangar Theatre Company. Next up for David is Bars & Measures for Mosaic Theater Company. Favorite sound designs include the Atlanta Alliance Theatre production of The C.A. Lyons Project (Suzi Bass Award nominated), Wig Out at Studio Theatre, Charter Theatre’s production of Am I Black Enough Yet? and Titus for the Washington Shakespeare Theatre (now Avant Bard). David’s has also sound designed at the Kennedy Center, Signature Theatre, Arena Stage, Imagination Stage, Geva Theatre, Catholic University, and Georgetown University.

Sean McCarthy (Producer), he/they, is a Producing Partner for Avant Bard Theatre, where they steward the Theatre’s supporters and collaborate on programs, like the Bard’s Action Corner, that engage the community. Sean joined the Avant Bard team in 2019 as a Development Associate and was promoted to the Producing Partner cohort in April 2022. They come to Avant Bard with extensive experience in nonprofit management, fundraising, communications, and external relations. He is a proficient grant-writer and fundraiser and supports mission-oriented organizations dedicated to building more culturally vibrant and equitable communities. Sean received dual degrees in Political Science and Communication from Mississippi State University and an M.A. in Political Communication from American University. They live in D.C.